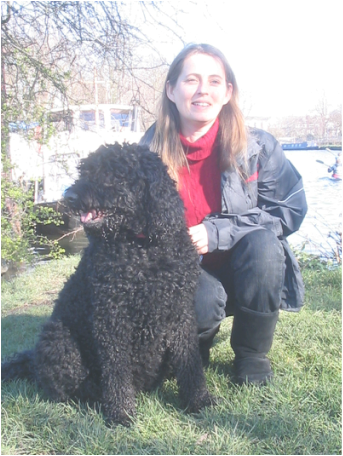 
One of  the most frequent questions we are asked, when out with either our Portuguese Water Dog Lulu pictured left, or our two Barbets, is....

A funny article that I read in the link below puts this into words so much better than I can.  I love the way this man writes. Very typical of some of the experiences we  have.
All in a day's dog walking! 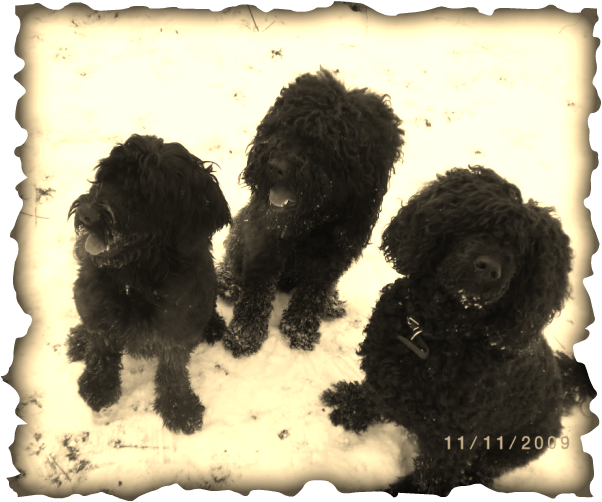 Well, go on, guess which one is a doodle, or a Barbet or a PWD, or a ............bet you can't!
From the photo above it is really difficult for most people to work out which breed is which. From left to right they are a PWD, Barbet, PWD.  I mention this because not long ago, I had an enquiry from someone in the UK. They sent me a photograph and asked if I could tell them which breed it was, could it be a Barbet? I looked very closely and  thought it was possibly a Spanish Water Dog, but still couldn't be sure. I asked around, and quite quickly ruled out the notion of it being a Barbet, as with there being so few of them around, we tend to know where they live not only in the UK but worldwide, and who bred them.
Barbets are very few and far between, in the UK there are at present (January 2012) only 24 residing here permanently, there is also one here on a short stay from America. Three litters have been born here, from the 25 puppies that were born, 3 have been exported (one was subsequently euthanaised), one has died, and 3 have been rehomed (update, 2 have now passed on, and 4 have been rehomed). There have been 4 imported since 2007, so as you can see, the numbers really are extremely low.
In France there are still less than 50 births per year.
The Barbet is an ancient breed, used historically in France for wildfowling. It is still used by very few as a working dog, most notably in the UK by Fiona Lucas with Odo's litter sister Nenu, Piotr Piotrowski in Poland with his Barbets (including Nelly's sister), and Jacques Cyr in Canada whom I was most fortunate to meet whilst he was visiting here in London. In Holland too, there is a lovely barbet Vino, who I had the pleasure of meeting whilst his owner Peter did a fabulous gundog demonstration.
It is also being used most successfully in France at the Schools for the Blind in both Paris and Lyon. Elaine Fichter of Barbets en Bresse is a great contributor to this programme with her donations. Therapy work is another area that is being explored, very successfully I might add, with Ania (Nelly's breeder) in Poland and Tracey with Tug in New York.
The dog in the query, has just had a happy ending. It was living in France and turned out to be a Lagotto (Italian Water Dog) and has been one of the first dogs to arrive to his new home in the UK under our new and more relaxed Importation of Pets regulations since Jan 1st.
Welcome to the UK Figaro!

Lac des Settons. 13th May 2001
The first Barbet that we know came to England in recent times was Robard Prince Noir de l'Etang (Robbie) , 11 years ago in 2001!
He was born in Mougins, near Cannes, South of France in September 2000. The photo shows the National d'Elevage held in 2001 where he was a participant.
He has never been bred from.