It is with great pleasure we can announce that Nelly and Odo have been mated, and we are expecting their puppies around the 11th January 2012.
We anticipate there will be both black and brown pups available.
If you are interested in owning one of these puppies, please CONTACT US for further details.

Update... Pups arrived safely, both sexes and both colours. All now in their new homes. 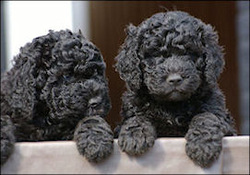 Why are we breeding?
When we first got Odo from the very first litter of Barbets born in the UK, we were asked if we would keep him intact (entire), in view of the extremely small number of Barbets in the world, around 700 when he was born in 2008, so that he could be used at stud.
We never at that time dreamt that four years later, we would actually be having our own litter!

We went to The National Elevage for Barbets, Lagottos and other Water Dogs in the Southern Loire in France in the summer of 2009, where we met up with nearly 40 Barbets and their owners from as far afield as Canada and Finland. It was when I saw these, that I realised there was alot more to the Barbet than I had previously thought! I had only ever seen the solid black ones that were resident in the UK so it was rather eye opening to say the least! There were big ones, small ones, brown ones and black ones, and some with white, frizzy ones and curly ones. I saw the type that I liked, and over a few drinks and a lovely evening meal with other owners, I decided that to own the type that I liked, I should import my next one. So when Nelly was born that September in Southern Poland, I spoke with the breeder (Ania) and booked flights so we could visit.

Nelly and her siblings 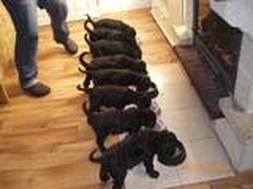 Nelly was beautiful, we fell in love with her as soon as we saw her, but... as she had to stay in Poland for the period of her rabies quarantine, I also asked the breeder to help decide which pup would be a good choice for her to look after too. We wanted a nice easy going pup and for her not to be too demanding. Well, Nelly fit the criteria really well, and ten months later,we packed up the van (five of us and Odo too) with our camping gear, and had an amazing journey taking us though Belguim, Luxembourg, France, Germany, Czech Republic (nice beer) then Poland.

Odo at the Czech Border 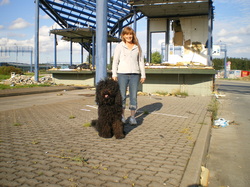 Our Portuguese Water Dog, Lulu, had to stay behind on this journey as it would have been too much for her, so she went off to West Wales for a holiday with her great Barbet friend and Odo's sister Nenu and Dylan the most handsome Newfoundland.
We met up with Ania  and Daniel in Wroclaw where they had driven to save us some extra miles, it was a sad occasion for Ania who was saying goodbye to Nelly, but a very exciting time for us.
After a couple of days stay in Poland, we headed back to the Czech Republic for a few days of relaxation, before heading north to the beautiful area by the German border, to walk in the forests and climb to amazing sandstone mountains around Bad Schandau. Nelly was off lead and walking beautifully, and returning to us when called, Odo fell in love with her immediately and was the perfect travelling companion. 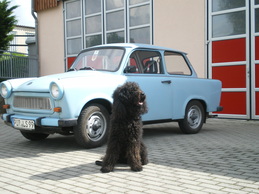 Odo rather liked this Trabant! 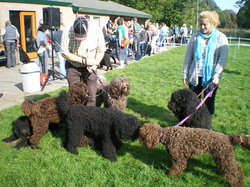 When we were planning this trip, we had an idea to take in some kind of event with our dogs. We had seen there was a show in the Czech Republic, also a larger International show in Luxembourg, but the thing that appealed most of all to us, not being particular lovers of dog shows, was the Barbet Club of Holland Fun Day. So we hot footed it across Germany after stopping in Dresden to find a vet for the treatment required to enter the UK, had an unexpected detour to Colditz Castle, a few hours sleep in the van on the border, and arrived in Holland to an extremely warm welcome from the club members and to the biggest  gathering ever of  Barbets with 50 and their owners being there.
We introduced Odo and Nelly to everyone, watched a grooming demonstration by Greet of the famous Quaciendas kennels, and also an excellent gundog demonstration by Peter Horsch and his Barbet Vino, Odo met and cuddled Walda of the Von der Leibrucke kennels who own his sire Boree.
All too soon we had to say our goodbyes, with promises of keeping in touch and meeting up again (we would highly recommend going to any of the frequent Barbet events in Holland if at all you possibly can) and made our way to the ferry for the long but peaceful crossing to Harwich.

Friends and Ice -cream in Paris 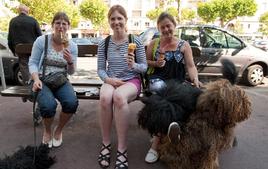 Summer 2011 saw the biggest dog show in the World taking place in Paris. Having never entered a dog show before, we decided to jump in with both feet first, and take all three dogs to Paris, Lulu of course was not able to be shown as she is a rescue dog so we don't have her kennel club registration details, but Odo with his French Pedigree, and Nelly with her Polish one, were both entered.
We spent two days at the show, deciding to enter the Championatt de France as well as the actual World Dog Show, and were delighted that Anne from Holland with her Barbet (Nelly's half sister) and Stacy the wonderful photographer and fellow Barbet owner from the USA were able to visit with us prior to the show. Anne, an excellent handler, had been most helpful in the weeks before the show with plenty of tips and advice, but when we went for a stroll along the river to town (to show Stacy the Macarons in the cake shop) Odo went for a swim! So much for him being ready to show the next morning.... That river was really filthy! However, they both managed to do really well in the show and behaved so well amongst the thousands of other dogs that had entered. The show was great, we met many people from all over the World and many new friendships were made, but most importantly for us, was that both Odo and Nelly were looked at very thoroughly by the biggest names in the breed, and were liked very much.
Odo and Nelly are both very good representatives of the breed, and more importantly, Nelly will be adding to the minute gene pool that we have here in the UK.